OUT NOW! The Terra Nostra 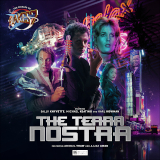 To mark the 43rd anniversary of the episode Shadow, Big Finish have today released the latest audio boxset in their Worlds of Blake's 7 range. This box set stars Sally Knyvette as Jenna and Michael Keating as Vila, with guest stars Karl Howman (Bek in the Series 2 episode Shadow) and Abigail Thaw, in stories by James Kettle, Robert Valentine and Peter Anghelides. These stories are set during B7 Series 3.

The Terra Nostra deal in whatever’s dirty, degrading, and cruel on every civilised world.
Weapons, racketeering, smuggling, assassinations, territory disputes. Their tentacles stretch and unfurl across the galaxy. Jenna and Vila each learn the hard way that they can never escape the Terra Nostra’s plots and conspiracies.

1. Stimulus/Response by James Kettle
Jenna Stannis has resumed her smuggling career after leaving the Liberator, and Stor Jayden is a dream location to unload her contraband. The Terra Nostra have other ideas. And with a reformist president recently elected on the planet, can Jenna escape with her cargo – or her life?

2. Entrapment by Robert Valentine
A heist to rip off the Terra Nostra requires a master cracksman. Fortunately for Kyzer Frik, he’s found one. Unfortunately for Vila Restal, it’s him. But as Frik comes to suspect a spy in his crew, how long before he decides that it’s reluctant member Vila?

3. The Offer by Peter Anghelides
Fleeing from his enemies, Vila Restal sneaks back into Space City. But it’s more difficult than he thought to get rescued – especially when he discovers he can’t trust an old friend. To save himself, must he betray the Liberator crew to the Terra Nostra?

Producer Peter Anghelides said: “The Terra Nostra are an ominous presence in the TV story Shadow, and writer Chris Boucher did a great job of hinting that there was more than we actually saw, but the focus was very much on their drug-running activities. My brief to the authors was that there are other aspects or details of the Terra Nostra as yet unexplored.
“Plus, I was delighted that we were able to get Karl Howman for our cast. It’s a nice acknowledgment of the original Shadow episode in which he appeared. This time Karl plays a completely new character called Tudnam, and we also got him to play a second character called the Enforcer who turns up at different times in all three of these stories.”

The Terra Nostra is available now on CD and download, and the tie-in audio novel Zero Point by Scott Harrison is available for pre-order.