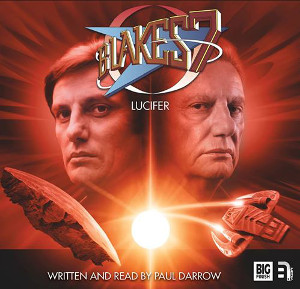 Lucifer is Paul Darrow's own continuation of the Blake's 7 story. Taking place after the devastating events on Gauda Prime, it's a lively tale that follows Avon's adventures and the power struggles of various factions competing for control of the remnants of the Federation. A review of the novel is here: Lucifer Book Review.

The audio version of Lucifer is a complete and unabridged reading of the book. Paul narrates it extremely well and his distinctive voice is a pleasure to listen to. The plottings and machinations of the Quartet are imbued with humour and dry wit, while the descriptions of their lavish meals are given an almost sensuous quality. As one would expect, Paul's delivery of Avon's dialogue is perfectly Avon-esque. There is quite a large cast of characters, and although not all of them are provided with individual voices, I particularly enjoyed Avon's interactions with the Swan Computer. Paul gives the computer's dialogue a Tuddenham-like quality, which makes Swan a rather endearing character.

In the book, Deputy Commander Dreyfus' line to Avon: 'You're him, aren't you?' raised a smile when I first read it and recognised its provenance. However, it also had the unfortunate effect of taking me out of the story at that point. It broke the fourth wall; it was the actor winking at the audience. However, in the audio version, Paul delivers the line in a straight and dramatic fashion, which worked better in context. I also found that I wasn't as conscious of the many occurrences of 'Well now' that Avon uses in later chapters – perhaps because Paul performs each one slightly differently.

In terms of sound design, music is used sparsely but effectively to provide breaks between the chapters, while atmospheric effects set the scene for the different locations. The quality is good, but occasionally the dramatic music crashed in unexpectedly and made me jump.

Despite the appearance of some familiar characters, Lucifer does not really feel to me like a Blake's 7 story. However, Paul's account of Avon's new adventures makes an enjoyable, action-packed political thriller. At 300 minutes spread over six disks, the audio version of Lucifer is a luxurious way of listening to Paul spin a story, drawing you into the entertaining world of his imagination.