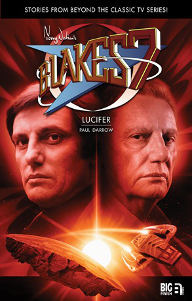 Many legends surround the aftermath of the collapse of the Federation, including the fate of Kerr Avon...

No kidding. The calamitous end of the series sent fan writers into overdrive, and so many sequels were written that they became a sub-genre known as Post Gauda Prime stories or PGPs. Depending on the writer's personal taste, any or all of the characters would have survived the apparent massacre. At conventions, Chris Boucher said that if the series was recommissioned, he would have found a way to bring back those characters whose actors were willing to return. As the years went by, Terry Nation and Paul Darrow spoke of an idea they were developing together, in which an older Avon would have been discovered living a Napoleon-like exile until drawn back into the rebellion. One way or another, it was agreed that whoever else was dead / written out – Avon probably did survive Gauda Prime.

Lucifer is Paul Darrow's second foray into Blake's 7 writing. His first novel, Avon: A Terrible Aspect was written as a prequel to the TV series; Lucifer, the first in a planned trilogy, is his version of a PGP. As such, it works better than A Terrible Aspect, in which his depiction of pre-Blake's 7 Avon was difficult to reconcile with the character we saw on screen in the first series. The Avon we encounter in Lucifer follows more closely what he had become in Season 4 – by reputation and by his own actions, a cold-hearted killer.

The first part of the book is set twenty years after the events on Gauda Prime. New characters are introduced, together with a set up in which the Federation has given way to a ruling Quartet, with all the protagonists jostling for supremacy. Avon is now living on Gaius 7, an island planet in the Beyond. The parallel stories of the Quartet's political machinations, their attempts to capture Avon and his determination to resist them, are drawn together and intertwined.

Part two is a flashback to the events that immediately follow the shooting of Blake and the Scorpio crew. Here we find out what happens to Avon and how he ends up on Gaius 7. The third section returns to the story twenty years on, and takes the narrative forward, preparing the way for the next book in the trilogy.

Paul Darrow's writing style is fluid, fluent and very readable, with good descriptions and lively dialogue. It's fast-paced and action-packed, and the overall structure of the book worked well. I enjoyed the new characters that were introduced, especially those that made up the Quartet. Their political machinations, manoeuvrings and intrigues as the various factions and their leaders vie for power made for entertaining reading. However, as none of the characters is particularly likeable, and there is apparently no further depth to them beyond motivations of ambition, greed and revenge, I couldn't warm to any of them.

Paul's depiction of Avon fits in well with what we saw in the final episodes of the TV series. There is wit and dry humour in his dialogue, and there are some crafty, fan-pleasing lines. However, as the narrative progressed, Avon's habit of starting every other sentence with “Well, now...” felt overused and became more of a verbal tic than a characteristic speech pattern. He's also extremely violent, and there are many deaths at his hands, some of which I thought were overly graphic and gratuitous.

In terms of Blake's 7 character continuity, there are credible references to Avalon and Travis, while Servalan and Orac make appearances. Servalan speaks and behaves more or less as one would expect, although depictions of her smoking and quaffing champagne seem to be based more on Jacqueline Pearce rather than the character she portrayed. Orac's dialogue is odd, though. Personal and almost emotional in tone, it doesn't fit the speech pattern or personality of the computer we saw in the series. Perhaps, like the Federation, Orac has evolved over the intervening years?

Regarding the established characters, my main disappointment was in the chapter which deals with the immediate aftermath of Gauda Prime - there is no proper acknowledgement of the former Scorpio crew. None of them is named and they are described only as corpses, dismissed as '...Avon's former comrades – not that there had been a great deal of camaraderie.' While I accept that in terms of his character, Avon himself may have been in shock at that point and focussed only on his own survival, some acknowledgement of his former crew-mates could have been made by the author – if not at that point in the story, then later, when the corpses are disposed of.

Concerning the question of whether this book feels like it belongs in the universe of Blake's 7 – frankly, it doesn't. The technology, weaponry and war-craft are neither in keeping with the retro-future vision of the 1970s, nor with those of the present day, but seem rooted in earlier wars. Machine guns, pistols and pump-action shotguns are employed throughout, with napalm used in a chapter very reminiscent of the Vietnam war.

As with Avon: A Terrible Aspect, the writing style seems to owe its influences to a mixture of Boy's Own Adventures and pulp science fiction writing of the 1950s, in which action takes precedence over scientific credibility. There's a real hodgepodge of space-faring vehicles – including heliplanes – and the astronomy is extremely ropey. On the whole, I was prepared to accept the anomalies and tried not be overly critical of the layout of stars, planets, galaxies and constellations, accepting this as part of Paul's idiosyncratic narrative style. However, an example that did bother me is the planet Iphegenia, which is described as ...lit by the Earth's same sun. If it's lit by our sun, that would place it as a near neighbour in our Solar System and there would be no need of hyper-jump drives to discover it. A judicious edit, removing the words referring to the sun, or amending them to read something along the lines of lit by a yellow sun would have helped, without compromising the story or style.

Like the first episode of a TV series, the first part of a trilogy can have a difficult job to do: establishing the characters and setting the scene that will lead into the next part of the story. Now that has been established in Lucifer, I hope that the next book will see the relentless action calm down a bit. I'd like to read more of the characters' thoughts and feelings – especially those of Avon. Up to this point, we follow all his actions, but are never really inside his head. Chris Boucher said that he always gave Avon two motivations for everything he did, which was what made the character so ambiguous, dangerous and fascinating, and it would be nice to see those aspects come to the fore. I also hope there will be fewer violent deaths and more sympathetic characters. I'm looking forward to reading the next book, and very interested to see how the story progresses.


Lucifer is available as an eBook from Big Finish here: Lucifer

Other novels and eBooks in Big Finish's Blake's 7 range are available here: B7 Novels
Current Poll
Which is your favourite B7 series?