Fan fiction and art were published in Horizon’s fiction zines (as well as appearing in many of the regular club newsletters.) Fan activities ranging from theatre trips to see ‘our’ actors on stage, fundraising events, conventions and location visits were organised through the club and its Regional Groups. Merchandise, both official and fan-produced, was sold at the regular meetings (usually held at the home of a committee member), conventions and by mail order, with the fan fiction anthologies and photographs proving the most popular.

Changing times and technology saw the club move from printed publications to a website, and Horizon is now a thriving online community. The website hosts lively debates, fan fiction, artwork, photographs, reviews and interviews as well as providing News and +Information+ on the website and on TWITTER – follow us @HorizonBlakes7, and @TravisinaB7.

We now take for granted the real-time forum discussions, but in the pre-internet ‘analogue age’, these used to take place over weeks or months, especially the comments and submissions from overseas members. See HERE - NL #5 for an example of an early newsletter. In all there were 40 issues from #1 (38 pages surreptitiously photocopied on Club Co-Founder/then-President Patricia (Pat) Thomas’s office copier) to the final glorious graphically designed & professionally printed 100 page #40 in Spring 2001, sporting 4 full-colour covers crammed with photos.

Horizon provides up-to-date news of the cast and crew, as well as new B7 and B7-related merchandise, and still organises theatre trips to see the cast on stage where possible, while groups of fans use the forums to co-ordinate location visits and other social events.

Some of the oldest fan activities have taken on a modern spin – instead of gathering at someone’s home to watch episodes on video, there are now regular ‘re-watches’ on the website; viewing, chatting and commenting in real-time. Last year, there was a special 40th anniversary rewatch of Series 4, each episode being viewed on the exact date of its original broadcast.

We’ve now added re-listens to Big Finish audios to our weekly schedule, with their range of excellent B7 audio dramas.

Horizon welcomes contributions for the website – articles, artwork, fiction, photos, etc. so if you’ve got something to share with other fans, do please get in touch. You can also submit items directly via the ‘submit’ links on the navigation panel.

You can still buy many items of Horizon-created merchandise directly from us (more info from Supreme Commander Diane), including fanzines, our Technical Manual and RPG, back issues of most of our printed newsletters, photos, signed items and more.

Following Terry Nation’s original endorsement, Horizon is recognised by the BBC, B7 copyright holders, actors & production team as the official Blake’s 7 Fan Club, and attracts Blake’s 7 enthusiasts from around the world. 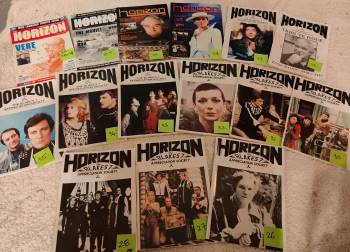