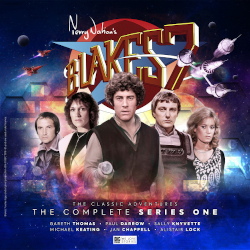 Six audio adventures re-released as one collection - what's not to like?

Wait: we are told it's designed as an extension to the second television series, so the Complete Series One fits in after Pressure Point and before Gambit (see wall1885's timeline here ).

We also know that the crew are aboard the Liberator; that we have Blake, Avon, Jenna, Cally and Vila, because they and the ship are still together for the later episode Star One. Sadly, there's no Gan, but they've gained Orac. What else would the stories need?

Firstly, more exploration of the characters and how they interact under stress, but let them grow a little and discover a bit more of their background, perhaps. How will they work with - or around - Orac, who doesn't always seem particularly helpful?

You'd need a villain: the Federation with its latest cruelties, experiments, weapons developments and injustices. We'd need to keep an eye on the President, on Supreme Commander Servalan and her Space Commander, because they're bound to be up to something.

Beyond this, what is Blake's next target? Is he still so single-minded about his cause that he's blind to other needs? Will the others continue to follow his lead? They keep making mistakes - the next time they leave someone behind, will they get away with it? How does any of this contribute to finding Star One?

All this, and more, Big Finish have shaped into this collection. It begins with the search for Star One, but the news that the Federation are fabricating their own version of the Tariel Cell means that Orac prioritises self-preservation, and everything else has to take a back seat.

As a result, they uncover secret Federation research into clones and some nasty new nanodrones. Further investigations expose Travis's viciousness, while the arrival of the President - who has a rather short fuse - leads to conflict.

To be picky, there were a couple of instances that seemed to repeat themes already dealt with in TV episodes, and the occasional line that felt 'off' - would anyone actually say, "We're on the ragged edge of teleport range..."? Overall, though, these tales are engaging, exciting and not a little disturbing. Classic Blake's 7, in fact.

Not only are we given the adventures, but we are also treated to more than an hour of behind the scenes interviews and commentary. There is some general background to the series as a whole, and separate sections related to each adventure. We hear comments and insights from those involved, both cast and crew, together with brief teasers from each story to whet the appetite. The cover art for the individual episodes is included with the downloads - a real bonus - and there are trailers for further Big Finish releases. 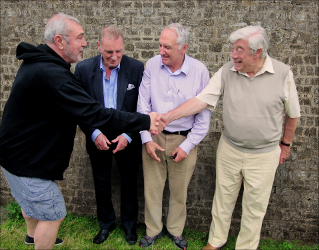 We are so lucky that, thirty years after the television series ended, members of the original cast came together to record more of the same. The phrase most of them used to describe the experience was 'It was fun' - so much so that sometimes they found it difficult to concentrate!

It certainly sounds as if the actors instantly found the same rapport they'd shared during the TV phase, and were able to recreate their characters within a similar atmosphere of support and good-natured teasing. For newer cast members too, the goal was the same: acting is about 'commitment, about believing in who you are, the environment you're in and the conceit you're portraying'.

Script Editor Justin Richards explains his intention - that this is 'real drama, not glorified book reading'. It's about 'capturing the essence of what Blake’s 7 was, and building on it', not doing the same things again.

Why does Blake’s 7 have such lasting appeal? Because it's not about the explosions, the exotic planets or the monsters. It's about the characters, and what goes on below the surface of their relationships.

These are real people in extreme situations: a group that didn't come together by choice, and don't always like each other, making the best of things in order to survive.

A few memorable quotes from the cast and crew:
'You get them in your head and then they almost write themselves...'
'Can I make the audience think I'm the same person (after thirty years)'?
'The main appeal was that I didn't have to learn the script!'
'Charm is essential in a villain.'
'It's wonderful to feel that we did something rather special.'

Blake’s 7 - The Classic Adventures: The Complete Series 1 is available from Big Finish HERE