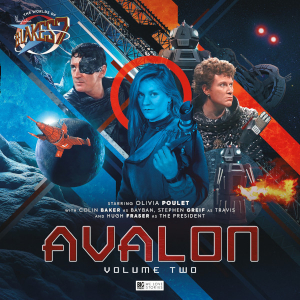 2.1 Bayban’s Bounty by Neil Bushnell
A sacred stone might inspire revolution on a recently subjugated planet – if Avalon can only retrieve it from a high-security prison. She enlists the help of the Vankberg Vault’s only escapee, the madman at the top of the Federation’s Most Wanted list…

The Avalon theme music - the intense beat, rising volume, blasters and quieter aftermath - provides a reminder of what went before, but now there are two outlaws aiming to make a name for themselves - albeit for different reasons.

Two months after the adventures of Volume One, Avalon (Olivia Poulet), with Madison (Cliff Chapman) still at her side and still complaining, is about to meet their next contact, Noral (Graham Seed). Avalon's ambitions on Earth having been thwarted, she's eager to join the campaign on Noral's frontier planet, where he's fighting against takeover by the Federation. But are Noral's plans an opportunity, or a trap?

First, they need to retrieve the sacred stone held in the Vankberg Vault, the Federation's high-security prison. To do this, they enlist the help of the only person who ever escaped from the Vault - Bayban the Butcher, the Federation's most wanted criminal.

It's wonderful to hear the inimitable Colin Baker reprise the character of Bayban the B... (insert an appropriate descriptive - plenty to choose from). By the time Bayban appears in the TV episode City at the Edge of the World he has 'a reputation for mayhem that's second to none'. Here he is on a mission of his own... along with blowing up anything that takes his fancy. As Madison observes, "What sort of trouble would we have to be in to call on Bayban for help?"

Attempting a stealth attack with Bayban as part of the team was never going to be easy, was it? With Noral on a mission from his god, and Bayban hearing voices, Avalon has her work cut out.

There is humour here, but it isn't all fun and games. The Vankberg Vault is a sinister place, thanks in large part to the threatening music and worrying noises created by Sound Designer Simon Power, who also helps to recreate those pesky Federation Security Robots (which make an appearance on the slipcover art!). Congratulations, too, for his bone-chilling sound effect to accompany the inhumane punishment the Federation imposes on Bayban's mother.

2.2. Mercenary by Christopher Cooper
Funding a crusade isn’t easy, and one of Avalon’s debts has just come due. She and Madison undertake a dubious mission, in the company of an even more dubious gun-for-hire, a man who has betrayed them once before…

Avalon has lost everything, and has only herself to offer... so that's what she sells, to her 'old friend', the arms dealer Corelano (Rachel Atkins). Avalon turns mercenary in the hope of a payment that will allow her to spark rebellion on yet another world.

Unhappy Madison is carried along in her wake, and they find themselves partnered with another 'old friend', Dev Tarrant (Malcolm James). Worse still, Corelano puts Tarrant in charge. After their previous encounter, it's not long before the three are at each others' throats.

Their contract is to visit a Federation mining and weapons development base to find out who has been selling supplies to Corelano's opposition... but has Corelano sold them out? Tarrant is also a mercenary, but to whom did he sell his skills? To Corelano, or to the Federation? Or does he have some scheme of his own?

As the tale progresses, Madison realises that although he agrees with Avalon's aims, he can no longer turn a blind eye to her methods...

Music and Sound Design are by Jamie Robertson, who occasionally adds little 'stings' of musical punctuation, neatly mirroring Madison's moods. As we've come to expect, the high standard of sound effects is maintained, even adding a touch of comedy with the clunky doors of the 'rust bucket' they are flying.

For me, a significant line was Dev Tarrant's cynical, 'Where would a rebel be without something to kick against?'. Where indeed?

2.3 Heart of Ice by Steve Lyons
What is the Federation President doing on a frozen backwater world? Avalon is determined to uncover the secret buried in Cryonax’s mines. By the time she realises that Travis is setting a trap, it might just be too late…

Making moral judgments is always difficult, especially when it's about who pays the price for success. In this story we are invited to consider our own position, as Avalon continues to make her name known. How far will she go in pursuit of her goal? Although she claims not to kill the innocent, they often suffer for her cause. She seems to have real difficulty in finding a balance between sacrifice and compromise.

On Cryonax, the 'ice planet' from the TV episode Project Avalon, Avalon discovers that the locals, led by Charon (Luke Barton), aren't much interested in joining her revolution. Years of being used as slave labour by the Federation have left them with little confidence, but with Avalon's encouragement they make a stand. A visit by the President (Hugh Fraser) provides additional motivation.

Stephen Greif returns to the part of Travis, his unmistakeable voice commanding our attention. Travis wasn't thinking of Avalon when he set up operations on Cryonax: he was planning a trap for Blake...

David Roocroft sets himself the tricky task of designing soundscapes that evoke a location already known from Project Avalon. Freezing winds, echoing corridors, weapon blasts, riots and roof falls provide plenty of familiar 'background'. Also, in his interview, he explains that he tried to compose incidental music reminiscent of Dudley Simpson's work on Blake's 7, although taking a slightly different direction as the narrative moves forward. In my opinion, he succeeds with both.

Heart of Ice leaves Avalon trapped on Cryonax, in preparation for the encounters of Project Avalon, while we are left to ponder who has the colder heart: Travis or Avalon?

I like the way details of this series continue to be fleshed out. One example is a description of the 'Filigree' communications system, which was mentioned but not explained in the previous volume.

The voices tell the story, but it's the sound environment that lifts them out of a studio into the world of our imagination. Big Finish do this well, enhancing the excellent writing and making the stories come alive for the listener.

The interviews with cast and crew give valuable insights into the making of Avalon 2. There's a historical aspect, too. Hopefully, future listeners will not have to experience a Covid pandemic lockdown and the restrictions under which these recordings were made. It's good to have this context explained, and to give a shout out to the Remote Recording Engineers, Paul Midcalf and Gerry O'Riordan.

All six Avalon stories raise the question: what's driving Avalon? Producer/Director John Ainsworth suggests that this would be worth exploring in future volumes.

It's an excellent idea. Let's hope it happens.


Avalon Volume 2 is available now from Big Finish on CD and digital download.

Catch up with Avalon Volume 1 also on CD and digital download from Big Finish.

Full details of their current range of B7 audio dramas, audio books and original novels can be found here: Big Finish B7 Hub