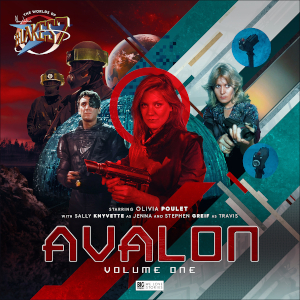 1.1 Terra Firma by Steve Lyons
The Resistance on Earth has been decimated. Blake has been arrested. Avalon returns home, to the seat of the Federation's power, to pick up the pieces. But she'll need the help of a self-centred smuggler named Jenna...

We are treated to both an all-action adventure, and interviews with the people who made it happen. The interviews reveal the background against which the Avalon series is set, and the standpoint of the main players. It might be worth listening to this track first.

In this first episode, small-time free trader Jenna Stannis has agreed to smuggle contraband for the Resistance. At a price. Her pilot, Krask (Nicolas Asbury), is a wanted man, and soon attracts the attention of an old enemy, Lieutenant Grayson (Will Ellis). The woman who is paying for their help is Avalon. With the Resistance on Earth reeling from the massacre of Foster and his supporters, Avalon aims to make her name a rallying point for the rebels because, as she says, ‘a name has power'. Forget Blake...

Deliveries completed, Jenna and Krask urgently need to leave Earth. Avalon's local contact, a sixteen-year-old 'Rat in a Maze', helps them from her base within the walls of the city dome. Things don't quite work out as they'd hoped, taking us neatly into the known territory of the early Blake's 7 canon.

It's great to hear Sally Knyvette back as Jenna, and Olivia Poulet's voice epitomises the strength of character needed in Avalon. There's more strong casting, notably Becky Wright as Fay and Cliff Chapman as Madison, whose voices relate perfectly to the characters they play.

Simon Power's music has a driving beat that promises things are definitely going to happen… strong, dark and menacing. The opening sound sequence of the ship's landing was particularly effective in setting the scene. Other backgrounds are enhanced with crowd noises and familiar blasts from Federation weaponry. Using public broadcasts to convey underlying narrative was a nice touch. There's also plenty of authentic grunting - helping us to appreciate the realities of moving around in aircon ducts.

It's a fairly simple storyline, but Terra Firma introduces a lot of themes that are going to be important as this series develops, and also ties up a few loose ends. It definitely whets the appetite.

1.2. Throwback by Gary Russell
Argo Madison’s career as a clerk was uneventful – until a band of outlaws burst into his ordered life and brought it crashing down around him. Now, Captain Travis of Space Security wants to know what Madison knows about the rebel leader Avalon...

In the interviews track, the writer describes this as ‘a character study of Travis’. The wonderful Stephen Greif returns to his role as the ruthless Travis, barely seeming to break a sweat as he conducts his sadistic interrogation. The prisoner - the eponymous 'throwback' because of his eidetic memory - provides a second study. Argo Madison is again performed by Cliff Chapman, who describes the character as 'a bit of an onion'. We might wonder whether his character's involvement with Avalon is as unintentional as he makes out.

The music, by Nigel Fairs, tends to have a lighter tone than in Terra Firma, although still using minor keys that add tension to the start of most segments. The one issue I had with his sound design is that I found it difficult to filter out the public announcements, again used to add to the narrative, from the overlaid music, sounds and voices. Maybe that's the point.

As Travis 'peels' the layers of his 'onion', we begin to understand something of his motivation as a soldier, and his chillingly calm dismissal of a moral conscience as being 'neither a requirement nor useful'. Meanwhile, Madison's predicament shows us that personal revenge need not involve physical violence: incorrect information can be just as deadly.

Avalon's mission to become a figurehead for the Resistance continues, ably assisted by her contact in Security, one Dev Tarrant (Malcolm James). Her statement that 'assets are there to be used' regardless of the consequences to innocent bystanders, makes her almost as scary as Travis. We are back to the old question of whether the rebels are terrorists or freedom fighters. It all depends which side you support.

1.3 Black Water by Trevor Baxendale
Avalon hopes to pull the Resistance on Earth together with a bold attack upon an Administration facility. But her plan might be doomed before she can put it into action, thanks to a traitor in the ranks...

Many of the same characters return, their changing relationships providing new angles to explore. Since none of the original cast of Blake's 7 are involved in this episode, the focus here is on seeing how the 'grass roots' resistance movement operates on Earth.

Madison is unhappy at having to join the rebels for his own safety. His struggle to adjust to life outside the dome again provides much of the local colour, emphasising the difference between being provided for - and controlled - by the Federation, and being free but uncomfortable.

We know where we are by the sound environment: inside the dome we hear the hum of people; mechanical noises; the transport system. Outside it’s air movement; rain; the lack of echoes. It's subtly and skilfully done, by Sound Designer David Roocroft. The music for this recording has a more electronic timbre, brighter, less threatening... until punctuated by the unmistakable shock of blasters. Perhaps it's a reminder that things are not always what they seem.

Avalon is still aiming for an attack that will make the Federation take notice. This time she's out to sabotage a hydroponics plant that supplies millions with food and water. If people suffer, she reasons, perhaps they'll wake up and THINK. She's even prepared to trick her own people if it means getting the job done. As with Blake, the Cause is what matters.

To some extent, she succeeds, but can no longer remain on Earth. Her story will continue... which nicely sets up Avalon Volume 2.

I appreciated the inclusion of the 'making of' interviews in this collection, and the way Avalon's story moves forward. It's evident that much hard work has gone into developing the detail of each character, as orchestrated by Producer / Director John Ainsworth.

Fans may debate the merits of having a spin-off series, but if the future Avalon volumes live up to this standard, I think they'll be happy.


Avalon Volume 1 is available now from Big Finish on CD and digital download.
Full details of their current range of B7 audio dramas, audio books and original novels can be found here: Big Finish B7 Hub