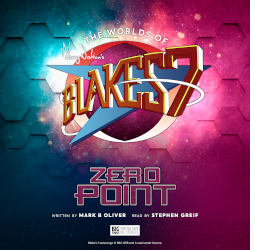 “Agreement is irrelevant,” replied Avon. “Cally is right, This weapon is too powerful. It would change the balance of power across the galaxy.”

Zero Point accompanies the Terra Nostra stories from Big Finish, and is set shortly after the Galactic War, when the Federation is in chaos. Powerful forces are fighting to gain – or usurp - control, while the loss of Star One means that resources are often unavailable, communications disrupted and personnel misplaced.

Into this mess step the crew of the Liberator, reeling from recent events, not least the loss of Blake and Jenna, and desperate to restore their ship to full function.

Following on from the TV episode Volcano, Mark B Oliver has drawn together many threads from the TV series, creating a new scenario where deception is the order of the day. He also introduces us to a believable set of characters, locations and motives, intertwining them into a satisfying whole.

The text often reads more like a storyboard for filming than a novel, because the action tends to be split between various locations, almost paragraph by paragraph. This gives the narrative an urgency and directness, keeping us abreast of what is happening in the various components of the tale.

Somehow Mark manages to do this without losing sight of the characters he presents. He can be forgiven, I think, for assuming we know the personalities of the Blake’s 7 universe well enough to avoid repetitious descriptions and backstories, while still building on that knowledge. It’s great to see Cally having a more central role, much more like the untamed freedom fighter we first met in the episode Time Squad. The new characters, both Federation and Terra Nostra, act as we might imagine, although not always when and where one might expect.

There is also a lot of ‘science’ going on, and while so much of sci fi mangles scientific terminology, along with the laws of physics, to suit themselves, here the author sounds more knowledgeable, and therefore more plausible. At least the devices he formulates have consequences, forcing his characters to face the responsibility of using them. 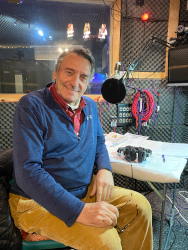 Loyalty - whether moral or mercenary – is a theme that remained with me from this story. Trust is a risky business at best: when you aren’t sure what authority your colleagues acknowledge, it can be downright dangerous. But as Servalan once said, when you know your enemy’s strengths, and can use them against him, they become weaknesses. This is true when you know who the enemy is, of course, but will Avon’s foresight also prove a match for the schemes of the invidious Terra Nostra?

I applaud the move to publish new hardbacks, because reading gives more opportunity for imagination and emotional involvement at a personal level. Normally, I’d much prefer that format. However, I have to admit that in this case I had only a download, but that hearing Stephen Greif’s reading made up for not having a book in my hands.

The familiarity of his voice, and his personalisation of the text, open up new ways of understanding the story. There is also a short interview with him, in which he describes how his long friendship with Paul Darrow made it easy to recreate his manner in Avon’s dialogue, making the experience bittersweet, because, as Stephen says, ‘He’s with me’. It’s a fitting tribute.

If the other two hardbacks are up to this standard, they’re worth waiting for. Thanks, Big Finish.

The full range of Blake's 7 audiobooks, hardback books and full cast dramas from Big Finish can be found here: B7 from BF.