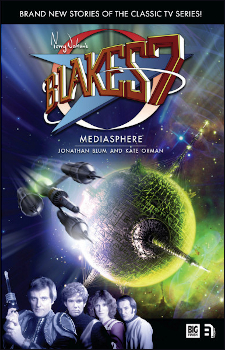 Put yourself back there, early in Series C of Blake's 7, somewhere between the episodes Powerplay and Volcano...
Mediasphere takes us into that time of change, when Blake is lost, and the crew must come to terms with a new reality.

The story is told from the viewpoint of one of the newcomers. Dayna, her past destroyed by Servalan's brutal intervention, must find her feet among the bickering group of rebels, who are struggling to decide their purpose without Blake's leadership.

But that's only the background. As part of the plan to find Blake, we discover Mediasphere, the news and entertainment hub where the Federation creates and propagates broadcasts designed to influence opinion. It's an institution where it is often difficult to distinguish between fact and fiction. Deliberately so. And who controls it?

Imagine glancing at a screen soap opera and seeing your own life being portrayed there. Being ridiculed, in fact. Unravelling what's going on only leads to further confusion. Working out how it's done takes all Avon's skill with computers, Orac's megalomania, Vila's thieving, Cally's strength and Dayna's... acting.

Her new friends aboard the Liberator had pushed her in at the deep end, without a chance to take a breath. But wasn't it the deep end where she liked to swim?

What follows is partly fiction, partly writers writing about writing. The book provides a platform for comment on the entertainment industry in general, and the construction of shows like Blake's 7 in particular. With their experience of creating episodes of Doctor Who, the authors are well-placed to project a future version of this cynical and often chaotic world of drama and tension, where those at the top are afraid, while those at the bottom are merely exhausted.

Who is behind all the intrigue? There are hints, not all of them helpful, as our heroes delve further into the workings of this media network, searching for answers before someone spots what they are doing. With cameras and microphones everywhere, it's going to be a close thing.

There's a balance between action and dialogue that gives the book a fast-paced feel. Much of the cloak-and-dagger activity might flow more naturally in a live production than in text, particularly towards the end, where everything begins to feel rushed. Occasionally, I took issue with the editing, where idiomatic phrasing sometimes made the wording feel 'wrong', but perhaps that's a personal issue.

For me, the tale is redeemed by some excellent descriptive passages that lighten the gloom a little, notably the interludes from Dayna's childhood. I feel I know her much better now. That's where this second-generation Blakes 7 fiction from Big Finish is so strong - because it fills in some of the gaps in the saga.

In Mediasphere, it's certainly done in an entertaining way.

Mediasphere is available from Big Finish in hardback and eBook formats here, and is currently on sale until 27th January 2022.