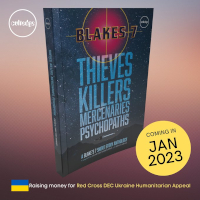 Cult Edge have announced that they received so many story submissions for their forthcoming 2023 Annual, that there isn't enough space to accommodate them all! Those stories that don't make it into the Annual will now be published in an anthology, due out in January 2023.

Cult Edge tweeted:
A heartfelt thank you to everyone who has submitted a short story for the upcoming Unofficial Blake's 7 Annual 2023. We've had over 35 submissions and the quality is phenomenal... there isn't enough space for all the amazing fiction you've sent. So, we'll be launching a short story anthology early next year, featuring stories that didn't quite make it to the Annual.
Thieves, Killers, Mercernaries, Psychopaths launches in January 2023 as a fully not-for-profit publication, and raising money for Red Cross DEC Ukranian Humanitarian Appeal - a charity chosen by Jan Chappell.