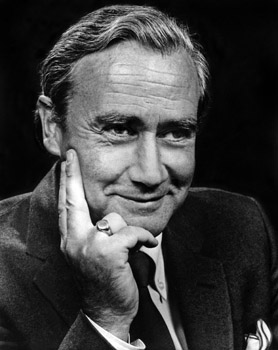 Born in Ipswich on 27 November 1918, Peter Tuddenham was brought up in the Suffolk seaside resort of Felixstowe. From an early age, Peter decided he wanted to go on stage. At school, Peter’s English teacher got him interested in the theatre and helped him with his diction. He played leads in Shakespeare plays: Benedict in Much Ado about Nothing and Prince Harold in Henry IV Part 1. As a teenager, he loved going to summer theatre and revues. He would make a note of their gags and use them at old people’s homes or at the local guide hut where they had entertainment evenings. He would also perform at social events at the local church where his father was an organist.

After leaving school, Peter got involved in amateur dramatics. He worked out an act of impersonations and presented it at an amateur talent contest. From there, he was offered a summer season at Dovercourt (Essex) where he compèred and performed various gags. He then wrote to impresario Harry Hanson who ran a number of repertory companies. Hanson interviewed Peter and took him on as a student. Peter learned his craft the hard way, starting off by holding the prompt book and sweeping the stage. He went on to perform walk-on parts and leads. Harry Hanson was in partnership with George Black Jr, whose father was in charge of the London Palladium. Peter ended up working for them in the big Moss Empire theatres as a guest artist where, at the age of 18, he played various parts, mostly in farces.

Peter’s first professional engagement was with Hanson’s Court Players company at Hastings in 1937. He appeared with companies under the same management in Penge, Nottingham, Birmingham and Herne Bay, until he was called up in October 1939, as a private in the Royal Army Service Corps (RASC). At Aldershot, after compèring a forces show and doing an act of impersonations, Peter was offered the job of permanent compère for the RASC staff band and became a member of the War Office Entertainments Unit. Working with comedians Charlie Chester and Terry Thomas, Peter entertained troops all over the UK, fulfilling a vital role in keeping up their morale.

Ten days after D-Day in June 1944, Peter was a member of the first party to entertain the troops on the Normandy beaches. Up to August 1945 Peter toured Europe, playing to the troops before being demobbed in February 1946. One of his last wartime engagements was compèring, half in English, half in French, the show Stars in Battledress at the Variety Theatre in Brussels for the Belgian Red Cross. Seeing Peter’s obvious talent for the stage, actor, composer and writer Ivor Novello (who happened to be in the audience that evening), offered Peter the second male lead, Franzel, in a new production of his highly successful musical The Dancing Years. The show went on tour before playing at the Casino Theatre in London. Peter stayed with the production for two years. It was there that he met his first wife, dancer Joy Harvey. 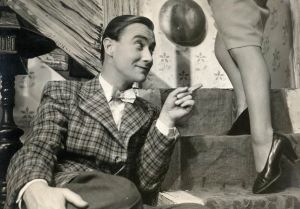 Peter went on tour in Terence Rattigan’s The Winslow Boy and for three months appeared as guest artist at Dundee where he played the lead in various repertory productions, including Charley’s Aunt and To Dorothy a Son. In 1950, he was offered the part of one of the three Juvenile Delinquents in Noël Coward’s musical farce Ace of Clubs, with Pat Kirkwood, Graham Payn and June Whitfield. The show played in Manchester, Birmingham and London’s Cambridge Theatre. In the 1950s, Peter appeared in numerous West End farces, revues and musical comedies, including Peter Ustinov’s The Love of Four Colonels. In this show, Peter played five different parts: an elderly French roué, a wicked fairy, a Shakespearean clown, an American gangster and a Russian gentleman. This involved 11 lightning-fast costume changes, which Peter took in his stride.

In the mid-1950s, Peter turned to television. He made his début presenting an advertising magazine on Southern TV, which had just begun. He then applied to be a presenter on Anglia TV and was in the very first programme to be transmitted on that network. He remained with Anglia TV for three years, compèring a quiz show Challenge Trophy with schoolchildren. He also interviewed people on a careers programme. He went on to do scores of voice-over commercials for Anglia TV, HTV and the national network, as well as readings for BBC TV education programmes.

Peter joined the BBC Radio drama company for two years, and went on to play a regular part in the series Mrs Dale’s Diary, as Dr Dale’s partner, Dr Mitchell. He horrified listeners in one episode by sitting on Mrs Freeman’s cat. Later, he had another long-running part, Ted Thurston, in the radio series Waggoner’s Walk. In all, Peter played over 300 roles on radio. Over the next 40 years he appeared in numerous plays, including A Self Made Man, Emma, Death and the Dancing Footman and The Mayor of Casterbridge. He read stories on Woman’s Hour, Morning Story and on several children’s programmes.

It was when a reader was needed for a Suffolk story on BBC Radio that Peter decided to make use of the dialect of the county of his birth. He was the first person to read a Suffolk story on radio. This led to him becoming an authority on the East Anglian dialects. He went on to adapt and read a series of stories, Toby and his Uncle Jake, written by Ronald Blyth. Sir Peter Hall heard Peter’s stories on the radio and in 1974 offered him the part of Old Tom, narrating the commentary for the film he was making of Ronald Blyth’s book Akenfield, the story of a Suffolk village. Peter was the only professional in the film, with amateurs playing the other parts. Sir Peter wanted the commentary to sound authentic and would not even let Peter read the script before recording it – which he did in the theatre director’s flat at the Barbican, over dinner! Akenfield went on to become a cult film.

Peter enjoyed an extensive television career for over four decades. He played all manner of guest roles in sitcoms and dramas. His début was as George Banham, in Weaver’s Green (1966), a drama set in a veterinary practice. He was a reverend in Nearest and Dearest (1968, starring Hylda Baker and Jimmy Jewel), a lollipop man in Happy Ever After (with Terry Scott and June Whitfield). He appeared as the bellringer Jack Godfrey in Dorothy L. Sayers’ The Nine Taylors (1974), with Ian Carmichael as Lord Peter Wimsey. He played a Swedish doctor in Quiller (1975). a solicitor in The Onedin Line (1980), a vicar in Bergerac (1987), and a priest in P.D. James’ A Mind to Murder (1995). Other TV appearances include Backs to the Land (1977), The Lost Boys (1978), Nanny (with Wendy Craig, two episodes in 1981-82), Tales of the Unexpected (two episodes in 1981-82), Maelstrom (1985 - a Blake’s 7 reunion as the series was directed by David Maloney, produced by Vere Lorrimer, with Paul Darrow appearing in Peter's episode), Lovejoy (1986), Campion – The Case of the Late Pig (1989), Maria Martin, The Trial of Lady Chatterley, David Copperfield, Swallows and Amazons Forever, Waiting for God (1993), The Bill (1995), One Foot in the Grave (1995), Camomile Lawn and The Chief. He played Charles, an 'upper class twit' in a two-hour Christmas special of Only Fools and Horses (1986), with Jack Hedley. His favourite TV role was playing the burger bar cleaner in a pilot and six episodes of the BBC comedy Double First (1988), with Michael Williams. Peter’s part was written as a cockney, but he suggested doing it in Suffolk dialect, which he did, and it worked famously.

Peter was the voice of the computer in the Doctor Who adventure The Ark in Space (1975) and the alien Mandragora Helix in The Mask of Mandragora (1976), both starring Tom Baker as the Doctor. In 1987, Peter returned to play the voice of Brain in Sylvester McCoy’s first adventure Time and the Rani.

In 1985, when Sir Peter Hall, as artistic director of the Glyndebourne Opera Festival, decided to put on Benjamin Britten’s Albert Herring, it was to Peter Tuddenham he turned in his search for the authentic Suffolk dialect.

“I want them all to sing in Suffolk accents” Sir Peter said.

“Will it work?” asked Peter Tuddenham.

The reply came: “I don’t know but are you willing to try?”

Peter most certainly was, and became dialect coach for the production. In preparation for the opera, he recorded the entire libretto spoken in Suffolk dialect, and a copy of the cassette was given to each of the singers in the cast. He then went to Glyndebourne and coached each singer in the dialect for their individual parts. It was a great success. Albert Herring was repeated the following year and Peter did the same with a different cast and again for the cast of Glyndebourne on Tour. Peter went on to dialect coach a new cast for a production of Albert Herring at Covent Garden. In 2002, Peter was asked to dialect coach for Glyndebourne again for four months during the summer, for a production of Albert Herring at the festival and a Tour cast.

Worldwide recognition for Peter came with Terry Nation’s classic science-fiction TV series Blake’s 7 (1978-81). The director, Vere Lorrimer, contacted Peter, saying they needed a voice for a computer in the programme, and asked him to come along and do some voices. They did not want a Dalek voice or a tinny or metallic tone, so Peter just put on a matter-of-fact, solicitor-type voice and that became Zen.

First broadcast in January 1978, Blake’s 7 was seen as an alternative to Star Trek which had already gained success, both in Britain and America. Set in a future where the galaxy is ruled by a totalitarian Federation, Blake’s 7 caught the imagination of audiences, who had become used to seeing humans enter space. Peter’s observations as the talking computer Zen helped broaden the programme's appeal, and made him a cult TV star. 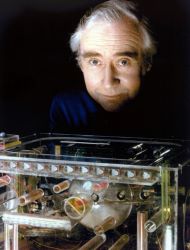 Peter also became the voice of the computer Orac - a fussy little bank clerk type of voice, and after Zen was destroyed along with the Liberator at the end of the third series, he voiced the Scorpio's computer - Slave, a computer who was always apologising and getting things wrong. Peter based this character on David Copperfield’s Uriah Heep.

Peter gave voice and personality to each of the Blake’s 7 computers for the whole of the four series, 51 episodes in all. It gave him a huge following in the UK and all over the globe. Not only did he receive a constant stream of fan mail, but was regularly invited to Blake’s 7 and science-fiction conventions up and down the country, at which he compèred, did a stand-up cabaret act, answered questions from the fans and autographed photographs. He took part in two conventions in the USA, in Fort Lauderdale and Chicago. After a break of 16 years, Peter reprised his roles as Zen, Orac and Slave in 1997 in the fan produced Blake’s 7 audio drama The Logic of Empire. He went on to recreate Orac and Slave in the Blake’s 7 BBC radio plays The Sevenfold Crown and The Syndeton Experiment (1998). Peter was also the voice of the Oracle in the adventure video game The Feeble Files (1997).

Peter moved from St John’s Wood, London to Worthing, Sussex in 1961 and, with Joy whom he had married in 1950, had two sons Mark and Jamie. Jamie tragically died in a motorcycle accident in 1983, at the age of 17. Peter remained in Worthing until his death, with his second wife Rosie whom he had married in 1975 and who gave him a third son, Julian. Peter loved his work and was looking forward, at the ripe old age of 88, to being dialect coach again for Britten’s Albert Herring, both for Glyndebourne on Tour in autumn 2007 and at the festival in 2008. 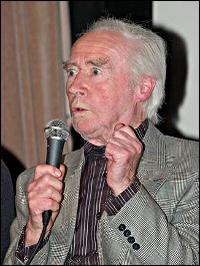 Some quotes from reviews of Peter Tuddenham’s stage performances: 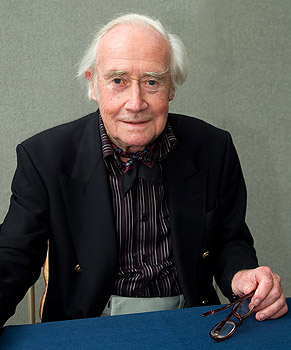