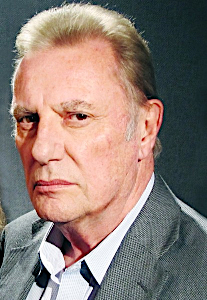 Paul Darrow's acting career spanned five decades, with hundreds of appearances on stage, screen, television and radio. However, it was his portrayal of cynical anti-hero Kerr Avon in Blake’s 7 that brought him worldwide recognition and legions of fans, and for which he will be best remembered.

The series’ eponymous hero was brilliantly played by the late Gareth Thomas, but it is arguably the character of Avon that helped make Blake’s 7 one of the best TV SF series of its time, and achieve cult status with subsequent generations of viewers. During Paul’s last TV appearance, in a sci-fi themed episode of the quiz show Pointless Celebrities in 2018, he and fellow Blake’s 7 actor Michael Keating were asked why they thought the popularity of Blake’s 7 had endured. Michael indicated Paul, and said: “This man.”

Paul Darrow was born Paul Valentine Birkby in Chessington, Surrey on 2nd May 1941. He attended Haberdashers' Aske's Boys School, then trained at the Royal Academy of Dramatic Arts (RADA), sharing a flat with Ian McShane and John Hurt. He changed his surname at the request of his agent; it was Paul’s father who suggested the name 'Darrow', after the famous American attorney Clarence Darrow.

After graduating from RADA in 1962, Paul worked at repertory theatres around the country, and on numerous TV series including The Saint, Z Cars and Coronation Street. In 1964, he met his future wife, the actress Janet Lees Price, in a production of The Hunchback of Notre Dame at the Theatre Royal York. From 1965 to '66, Paul had a regular role as Dr Simon Verity in ITV’s medical soap Emergency Ward 10, together with Janet. They were married in 1966, and their appearance in the series led to them being recognised while on honeymoon in Paris. They continued to appear together in stage productions such as Gaslight and Trap for a Lonely Man, and most notably on screen in the final episode of Blake’s 7. Paul and Janet enjoyed 48 years together until her death in 2012.

Paul’s early TV roles also included Captain Hawkins in Doctor Who and the Silurians in 1970 (with Jon Pertwee as the Doctor), and the Sheriff of Nottingham in the 1975 BBC series The Legend of Robin Hood.

Returning from Canada, where he had been touring in Rebecca, Paul was invited to meet BBC producer David Maloney for a series ‘set in the future’. He was told that the role was ‘Avon – some kind of engineer’, and at Janet’s suggestion he went to the interview wearing a tweed jacket with leather elbow patches. Given the script for The Way Back, he was somewhat bemused to find that Avon wasn’t in it, but after reading Space Fall he realised that the character would be a career-enhancing role.

The writers and production team quickly realised the character’s potential, and as the seasons progressed, Avon moved to the fore and Paul Darrow’s name moved up the list of end credits. When Gareth Thomas left the series after two years, Blake’s 7 continued for a further two seasons with Paul as the lead. Despite giving rise to jokes that it should now be renamed Avon’s 5, the series retained its popularity, with episodes watched by up to 10 million viewers even when scheduled against Coronation Street. 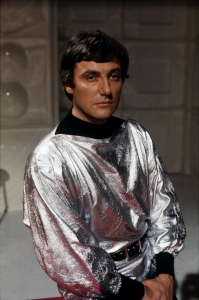 Paul became life-long friends with the series’ creator Terry Nation and his family. A shared love of Western movies led writer/script editor Chris Boucher to insert classic lines into Avon’s dialogue, which Paul performed with relish, wielding his Liberator handgun like a six-shooter. “I was aiming for his head,” he says in Orac, after shooting Travis’ hand. Director Mary Ridge nicknamed him 'Blint', saying he was ‘a combination of Burt Lancaster and Clint Eastwood’.

But although it’s Paul’s mannered and sometimes flamboyant acting that stand out, he was also capable of great subtlety, as evidenced by his restrained, moving performance in the episode Rumours of Death. Chris Boucher said that he always gave Avon two motivations for his actions; a noble one and a selfish one. These ambiguities have fuelled fan debates for many years, and together with Paul’s good looks and distinctive voice, contributed to the overwhelming popularity of the character.

To many viewers, Avon was their childhood hero, their teenage crush, their creative inspiration. He was the last crew member left standing in one of television’s most memorable finales; the final image a close-up freeze-frame of his wry smile. Little wonder that Avon is the character most associated with Blake’s 7, and a genuine icon of TV science fiction.

When Blake’s 7 ended, Paul returned to the stage, touring in several productions including the comedy Don’t Start Without Me, with Michael Keating. He made a moving Captain Robert Falcon Scott in Terra Nova – noting as an aside that ‘Nova’ was ‘Avon’ spelled backwards. In 1991 his production company, Satchel Productions, held a summer season of three plays in Worthing. Paul appeared with his wife Janet in Gaslight, and in Dial M for Murder with both Janet and Michael Keating, directed by Vere Lorrimer. Paul directed Michael and Janet in Relatively Speaking. This was followed by a UK tour of Macbeth which he directed and played the title role, with Pamela Salem as Lady Macbeth.

Paul was most proud of playing Elvis in the UK tour of Alan Bleasdale’s Are You Lonesome Tonight. He was a great fan of Elvis Presley, so although this was the most difficult of his stage roles, for which he had to take singing lessons, it was also his favourite. In 1998 and ‘99 Paul delighted audiences with his portrayal of Captain Vimes in the touring production of Terry Pratchett’s Guards, Guards!

On TV, he played Tekker in the Doctor Who story Timelash, with Colin Baker as the Doctor. Paul claimed that his shamelessly over-the-top performance was revenge for Colin having stolen all the scenes in his guest appearance on Blake’s 7. Other notable TV roles were the despicable, yet ultimately tragic, Mr Carker in Dombey and Son with Julian Glover, and Judge Prentice in Law & Order UK.

Despite his love of cinema, big screen roles proved elusive. A scene he filmed for the James Bond film Die Another Day was cut from the final version.

Paul’s rich and distinctive voice lent itself to audio, and he did a vast amount of voice-overs, commercials, narration, readings and audio drama. He voiced several PC games, notably Gender Wars (with Jacqueline Pearce), Queen the eYe (with Jacqueline Pearce, Peter Tuddenham and Janet Lees Price) and Hostile Waters (with Glynis Barber). Most recently, he played Paul Rand in the 2015 live-action murder mystery video game Contradiction: Spot the Liar.

Paul was the ‘voice’ of independent radio stations Jack FM and Union Jack for over a decade, delivering topical sound-bites, quips and puns. His audiobooks include the Trevor Hoyle novelisations of Blake’s 7: Cygnus Alpha and Project Avalon, and Terry Nation’s Rebecca’s World. On playing Paul Baxter in the 1980 BBC radio adaptation of Tanith Lee's The Silver Sky, he commented: "If all sci fi writing were like this, the genre wouldn't have such a bad name."

He played Lord Rathen in the award-winning sci fi audio drama The Minister of Chance, alongside Jenny Agutter, Sylvester McCoy, Julian Wadham and Paul McGann. The producers said: “In the studio, he’s a gent and has a stack of career anecdotes at his fingertips, along with a terrific John Wayne impression. It would have been very easy to shut up shop and just listen to Paul’s wonderful stories instead. In one episode, he threatens several of the cast with a gun, which of course we didn’t have available. I shall never forget the sight of him threatening Jenny Agutter with a banana!” 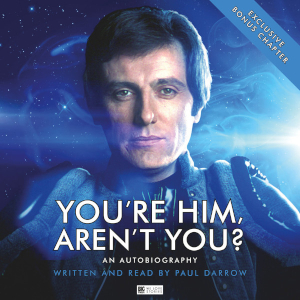 Despite the years passing since Blake’s 7’s final TV transmission, the series retained its popularity, with frequent calls for a continuation. Paul discussed ideas with Terry Nation, in particular a suggestion for a two-part TV special that would see Avon as an older, Napoleon-on-Elba type figure. None of these came to fruition; nor did other attempts to revive the series on screen. However, Big Finish took up the mantle in 2011, reuniting the original Blake’s 7 cast for an ongoing range of audio dramas, and Paul effortlessly recreated the role of Avon in a brand new series of adventures.

Paul enjoyed writing, and wrote four novels featuring Avon. Avon: A Terrible Aspect was a prequel to Blake’s 7, and his Lucifer trilogy, published by Big Finish, was set after the end of the series. He drafted an unproduced script for the fourth series of Blake's 7, entitled Man of Iron. For Big Finish, Paul also contributed a short story for their Heroes anthology, and a script for the Crossfire Part Two box set. His 2006 autobiography, You’re Him, Aren’t You? was published by Big Finish, and he recorded an updated audiobook version in 2016.

Paul had legions of fans, and he enjoyed fandom; a phenomenon he had first encountered with Emergency Ward 10. He described fandom as ‘a world out of the ordinary’, and a crucial contributor to the longevity of Blake’s 7. He replied to fan mail, and was a regular guest at conventions and signing events, always taking time to speak to individual fans, remembering those he had met before.

Horizon organised many group theatre outings to see Paul at TV recordings and on stage, followed by pre-planned after-show meetings. When he toured in Guards, Guards! several trips were arranged around the country, including surprise parties for Paul with guests of honour Peter Tuddenham and David Jackson. In 1996, a large group of fans travelled to Birmingham for the recording of the game show Noel’s Telly Years. The crowd waiting to meet Paul after the recording was many times larger than the small group waiting for Noel Edmonds. On a group outing to see Paul as the Sheriff of Nottingham in the pantomime Babes in the Wood, the audience was bemused by the loud cheering from his fans, instead of the traditional boos.

Paul was good looking, charming, with a trove of showbiz anecdotes, a penchant for puns and a wicked sense of humour. He had an optimistic attitude towards life, and coped with its challenges by looking for humour in dark situations. This was especially demonstrated when complications following an aortic aneurysm in 2014 resulted in the amputation of both his legs. Wheelchair-bound, he continued to act, write and appear at conventions and events, including the 2017 Supreme Cat Show, where he was one of the judges. At the fan event Blake in 2017, he and fellow cast members paid tribute to Gareth Thomas who had died the previous year. Funds were raised for Alzheimers Research UK, and Paul was in great form as he ran the charity auction.

Paul had been looking forward to meeting fans and friends at Maximum Power on 23rd June 2019, an event commemorating the late Jacqueline Pearce who had passed away on 3rd September 2018. Sadly, it was not to be. It is a cruel twist of fate that exactly nine months after losing Supreme Commander Servalan, Blake’s 7 fans lost Avon. Maureen Marrs, Paul’s friend and PA, said: "Over three decades I have been Paul's confidante and have had the immense privilege of being part of his life. A star has gone out today; the world will be a darker place without him."

Paul described all his work as “fun… otherwise, why do it?”, and despite his long and varied career was content for the character with whom he is most associated to ever be hovering at his shoulder.

"In the end, all I want – what all actors want - is to be remembered for something,” he said. “I do not mind being forever Avon."