I was going to make that part my own … just as Stephen Greif had also made the part his own.

In this DVD, released in December 2021 - marking forty years since the final episode of Blake's 7 was transmitted - Ian Kubiak talks to Brian Croucher, who played Travis in the second series. It’s a wide-ranging interview that touches on Brian's numerous other stage and TV roles, which famously include roles in Doctor Who and EastEnders.

Growing up in London, surrounded by petty crime and violence, Brian decided he wanted something better. Signing up for an evening course in Stage Management was the beginning of his escape route, but he never lost the grounding in reality that his early life provided. Attracted to gritty drama, he usually found himself playing hard guys and baddies, rarely characters with any softness or romance. From acting he then moved into directing and to teaching, giving back something of what he'd learned to other night school classes.

He is suspicious of those whose aim is money or celebrity status. For Brian, acting is something you have to need to do. Being well-known was an uncomfortable experience for him.

With hindsight, he says there was a lot of ham acting in his Travis, and that in the episode Trial in particular he remembers being ‘a bit shouty’, but it is evident he recalls the part with affection. 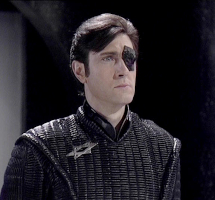 He has reprised the role for Big Finish, in their 2014 full cast audio drama series Blake’s 7: The Classic Adventures Series 1, and more recently in The Worlds of Blake’s 7: The Clonemasters – alongside Stephen Greif! The Clonemasters was made during the Covid-19 pandemic lockdown, and Brian enjoyed learning how to work remotely. He also describes the way lockdown forced the auditioning process to change from face-to-face meetings to ‘Self-Tapes’.

Throughout the interview, it's clear that Ian Kubiak knows Brian well, reminding him of events and stories they have previously shared. No doubt their familiarity helped Brian to feel comfortable talking about himself on camera, a different experience from being interviewed at conventions before an audience of fans. Ian’s questions are well-constructed and progressive, avoiding repeats or over-emphasis on details.

The quality of the filming is excellent, with occasional helpful cutaways to stills of archive material (many provided by our own Supreme Commander Diane Gies) to illustrate particular points. Those backgrounds were a little startling at first, contrasting sharply with the quiet domesticity of Brian's home, but I soon got used to them.

The DVD also includes a Biography of Brian Croucher, and - above all - don't miss the Behind the Scenes fun!

Reeltime Pictures is the brainchild of Keith Barnfather, producer, director, cameraman and editor of a catalogue of over two hundred interviews with cast and crew members of many much-loved cult TV shows. Check out his websites Time Travel TV and Reeltime Pictures for more information.